Pierrick Sorin is a video artist, director and set designer. At the end of the 80s, Pierrick Sorin made self-films, in Super 8 cinema. Through short stories - in which he plays all the roles - he takes qn objective and derisive look at his daily life and questions, in a burlesque way, the act of creation. From 1995 onwards, he created numerous optical theaters, works in which he appears as a hologram, among real and palpable objects, sometimes «in miniature», sometimes on a human scale. Since 2006, he has been designing and directing shows, particularly in the field of opera. His set designs are always based on the use of video as a tool for visual creation live on stage. The singers become actors in a film created in real time. Pierrick Sorin has exhibited in numerous museums, art centers and galleries: Tate Gallery (London), Guggenheim (New-York), Metropolitan Museum of Photography (Tokyo), Fondation Cartier, Centre Pompidou (Paris). He has directed several operas (Mozart’s The Magic Flute, Offenbach’s La Belle Hélène...) for houses such as La Scala in Milan, the Lyon Opera and the Théâtre Musical du Châtelet. 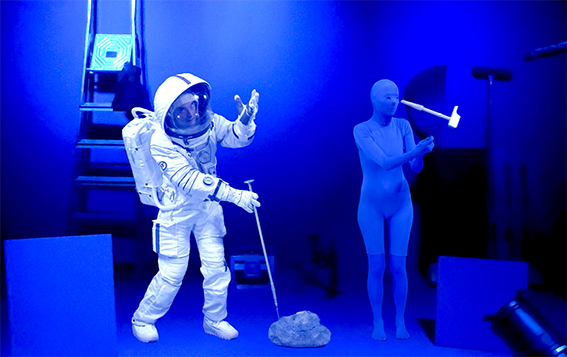 Pierrick on the Moon (mission 2)