For his solo show at Galerie Charlot, Antoine Schmitt presents his new work « War », a series of different generative paintings, warfare frescoes exploring ancient and contemporary war’s structures, movements and combat tactics. With an elegant, minimal and abstract aesthetics, Antoine Schmitt puts two groups of autonomous pixels face to face - bright colored warriors programmed to relate in real time. Each tableau explores their antagonistic relationship, the source of a violent tension in a state of perpetual renewal. In front of these never ending carnages, we could be led to question the essential distinction between war and conflict. Antoine Schmitt shows an intrinsic mechanism of the human beings, which can be both vital and destructive. The artist’s work have already explored the fragility of the equilibrium between elements in a pacific tension. «Swarm» fluid movement, « White Pixel » unpredictable path or « Ranger - Déranger » methodic displacement, pointed out the dynamics of contrary forces. Heir of kinetic art and cybernetic art, Antoine Schmitt endlessly interrogates the dynamic interactions between human nature and the nature of reality.

War is the delicate situation par excellence in which humans have been immersed since the mists of time. Humans are the only species (with ants) to go to war. It is in its genes. Our ancestors were warriors, we are their descendants. We are the products of immemorial slaughters. Contemporary forms of war are no less bloody and no less harsh than ancestral wars, they just take more varied forms.

The War series features infinite generative animations of war situations. They are real wars between inexhaustible armies of pixels programmed to fight and kill each other. They are carnages (of pixels), large abstract warfare frescoes, of cathartic effect. 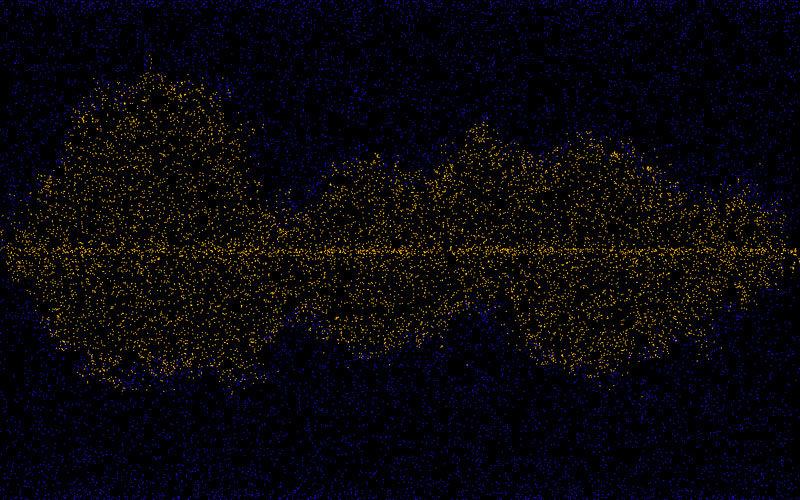 Burning from the inside (War series)